‘A Known case of myasthenia gravis, psoriasis, alopecia, Sjögren’s syndrome, and Multiple sclerosis (MS) since the age of 14, this 39-year-old female had undergone under all available treatments without any desirable outcomes. Thus her quality of life had declined significantly.’ 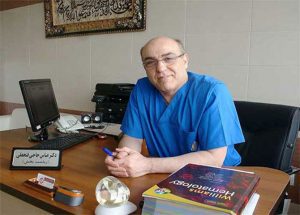 He also added: ‘Specifically, her myasthenia gravis was a refractory one with severe muscle weakness, resulting in repeated respiratory failures that required her to be intubated and mechanical ventilation at the ICU.

Due to persistent failures in treatment and the recurrent crisis of this autoimmune neuromuscular disease, her muscles have deteriorated as well as suffering from chronic shortness of breath.’

Hajifathali also explained: ‘In addition, her MS has also declined over the past two years.

When we met her for the first time, she could hardly walk even with two canes.’

Another member of the transplant team, Dr. Sayeh Parkhideh, faculty member of Shahid Beheshti University of Medical Science, told IRNA: ‘Bone marrow transplant has been used successfully to treat various types of blood cancer for more than thirty years in many countries and Iran. Actually, besides several risks associated with bone marrow transplant, the treatment is a high-cost one. Accordingly, just in the case of failures of all routine treatments, it will be the last procedure to be considered. Consequently, it had not been performed in Iran until then.’

Stressing that this patient suffering from multi autoimmune syndrome was the first case in Iran, Hajfathali noted: ‘As the treatment was not performed in Iran until then, we were not aware of such a case. Enjoying high morale despite many years of chronic diseases, she sent me an email to ask if we could help her promote her quality of life.’

Mentioning that her case was undoubtedly a rare one, Parkhideh continued: ‘In addition to chronic shortness of breath, given to several years of taking immunosuppressive drugs, she was affected with numerous side effects. Therefore, there existed significant life-threatening issues to take into account. However, the transplant team decided to perform such a treatment for the first time in Iran. Spending three months inspecting this demanding multidimensional job, ultimately autologous bone marrow transplant was chosen as the most effective approach to take.’

While this treatment can be quite helpful for multi autoimmune patients, Hajifathali emphasized: ‘Not every patient is a good candidate for this treatment. There are several factors requiring precise deliberation by the transplant team and other relevant specialists. Moreover, the patient’s mental status must be stable enough in the psychiatric assessments.’

Explaining autoimmune diseases, Dr. Mahshid Mehdizadeh, bone marrow transplant specialist and another member of the patient’s treatment team, said: ‘An autoimmune disease is a condition in which the immune system mistakes part of the body like joints or skin as foreign cells just to send out an army of fighter cells to attack them. These types of diseases are chronic, requires long time using medications and can negatively affect the patient’s quality of life.’

Dr. Mehdizaedh also mentioned: ‘Some autoimmune diseases, such as myasthenia gravis are rare. Thus, the coexistence of several autoimmune and rare diseases in an individual is somehow unprecedented and worth studying. So although she did not have cancer, a bone marrow transplant was the sole hope for improving her quality of life and containing the diseases.  Now, after a year since her treatment, the general condition of this 39-year-old woman is favorable. With no recurrence of myasthenia gravis and MS attacks, her quality of life has improved significantly.’